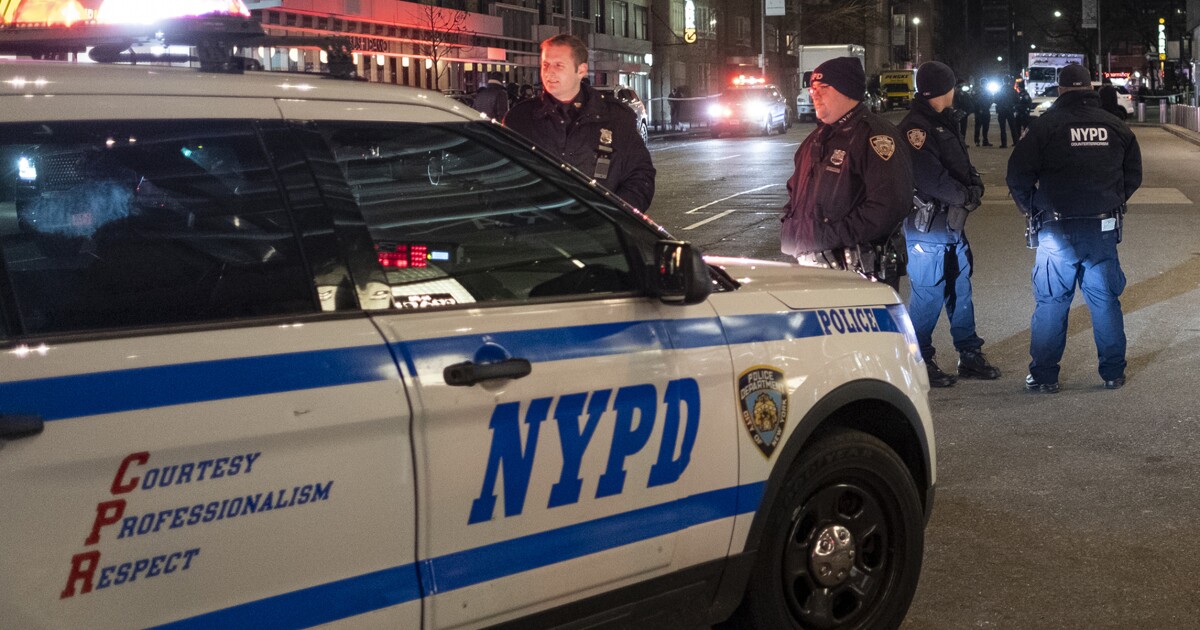 A New York police officer was released from the hospital early Wednesday after being shot by a suspect who was reportedly armed with a stolen gun.

A New York police officer was released from the hospital early Wednesday after being shot by a suspect who was reportedly armed with a stolen gun.

Fellow officers greeted Officer Dennis Vargas, 32, with applause as he walked out of Lincoln Hospital in an arm brace. Vargas was shot in the arm by Rameek Smith, 25, who was also shot but died of his wounds at St. Barnabas Hospital.

“I want to thank Dr. Raja and the entire team here at Lincoln Hospital for taking great care of our officer and for their constant support,” Commissioner Keechant Sewell said in a press conference outside of the hospital Wednesday. “I have to commend our courageous officers. This is what we ask them to do. And they’re on the streets every day and night risking their lives on behalf of New Yorkers.”

Officers gather at Lincoln Hospital to honor the bravery of our Officer who was shot hours ago. We all wish a speedy recovery. pic.twitter.com/4Xx8fZgw8I

Vargas and his partner noticed Smith on the street just after 10:45 p.m., according to police. Upon approaching, Smith fled on foot, initiating a chase. Vargas began on foot, and his partner followed in the car. Smith and the officers exchanged gunfire, and police later discovered that the 9 mm gun Smith used was stolen from Richmond, Virginia.

Mayor Eric Adams also appeared at the press conference, pointing out that Smith was “a perpetrator with multiple arrests,” including charges of robbery and the possession of a .32-caliber handgun.

“How was he found to have been carrying the weapon?” Adams said. “He jumped the turnstile in the subway system and had the weapon on him. Here’s the problem: The arrest was March 2020, and for 20 months after the arrest, he remained on the streets. He finally pled guilty December 2021.”

“People want to ask why are we pushing for reform?” the mayor asked. “That’s why. That’s what we are up against.”

Sewell agreed that Smith was a “dangerous criminal who shouldn’t have been on the streets of the Bronx or anywhere else.” Police have taken roughly 2,600 guns off the street as of November 2021. Meanwhile, on Tuesday, the New York Police Department recognized 49 fallen officers, 14 of whom died in the line of duty.

“[Police are] up against those who believe we should be spending our attention protecting criminals,” Adams went on, alluding to Manhattan District Attorney Alvin Bragg’s controversial memo to not prosecute nonviolent crimes. “Who the hell will protect the innocent New Yorkers in this city? That’s a question we have to ask ourselves. It is time for us to stop spending our energy protecting people who are committing crimes and violence.”

The shooting occurred in the Bronx, just north of Manhattan. Adams told reporters that he has family members with addresses nearby.

“I’m tired about the complaints about the officers that are doing their job,” he said. “We’re spending more attention critiquing their actions. Let’s critique the actions of those who are committing the crimes in this city. That’s what we should be critiquing. That’s where my attention is.”

“I agree,” Police Benevolent Association of New York City President Pat Lynch said, gesturing to the mayor. “What will it take before our legislators realize they’ve made a mistake?”

Vargas is expected to make a full recovery.