Remembering when Vlad the Impaler launched a midnight raid against Muslim invaders that would cause his name to live in eternity.

Today—or rather, tonight—in history, Vlad the Impaler launched a midnight raid against Muslim invaders that would cause his name to live in eternity as Dracula, the terror of the night.

The year was 1462.  Ottoman sultan Muhammad II (or “Mehmet”) had demanded tribute, by way of gold and Romanian boys to serve as his slave soldiers (janissaries). Vlad III Dracula—better known as Vlad Țepeș, or the “Impaler”—the ruler of Wallachia (modern day Romania) responded by sending the Muslim emissaries back to Muhammad with their turbans nailed onto their heads.

So it would be war. Muhammad mobilized one of the largest Ottoman armies in history, according to some estimates, between 150,000-300,000, and invaded Wallachia, terrorizing all and sundry and engaging in unspeakable atrocities, especially against women and children.  With only some 30,000 men—many of them peasants whose “armor” consisted of sheep’s wool, their weapons axes, scythes, and hammers—Vlad was forced to resort to guerilla tactics.  Though he launched several successful sorties against the Islamic invaders, these barely made a dent in the Ottoman force, which consisted of “Allahu Akbar” screaming jihadists “as numerous as the stars in the sky,” to quote an early source.

Knowing that he could never defeat the invaders, Vlad decided to do the next best thing—decapitate the head of this vast Islamic snake ravaging his country: in an effort to demoralize and disband the Turks, Vlad decided to assassinate the sultan.

Thus, on the pitch black night of June 16/17, 1462, somewhere near the foothills of the Carpathian mountains, where Muhammad and his vast Turkish host were encamped and asleep, Vlad, with anywhere between two thousand and seven thousand horsemen, violently blitzed into the lion’s den in search of the sultan’s head.

According to the testimony of one of his riders, “moving as quick as lightning in all directions,” Vlad “butchered large numbers of Turks” during his mad hunt for Muhammad. In the darkness and din of war, the sultan, startled and confused like the rest, “fled from the camp” in a panic. The same source says this midnight visitation of horror lasted for six hours, ending just before dawn. It was only then, when Vlad had retreated to his mountain stronghold, that the sultan was “brought back almost by force.” As for Dracula, “No one dared pursue him, since he had caused such terror and turmoil.”

Due to its spectacular and unprecedented nature, contemporaries wrote a fair bit about this daring run, known in the sources only as Dracula’s “Night Attack.” “At first,” writes the contemporary chronicler, Chalkokondyles, “there was great terror in the camp, as the sultan’s men believed that some large foreign army had attacked them, coming from abroad; they believed that they were utterly doomed, and were reduced to great fear and trembling.” He explains how Vlad appeared to them as one with great authority, riding in tight, phalanx formation “with torches and horns, to signal the attack.”

[Thus] the Turks became very terrified and were paralyzed, each staying where his tent was pitched…. He charged first against the sultan’s Porte [personal encampment]. But they missed [it] and fell instead upon the tents of the viziers, namely of Mahmud and Ishak. A great battle was fought there and they killed camels, mules, and pack animals [to immobilize the Ottomans]. As they were fighting in an orderly and compact group, they suffered no losses worth mentioning.… Then they turned and charged [again] against the sultan’s Porte, but they found the sultan’s men deployed outside [it]. They fought there briefly, then turned to the camp’s market, plundered it, and killed anyone who stood in their way. With the approach of dawn, Vlad withdrew from the camp, having lost very few men that night.

Relying on Ottoman accounts, Hollywood would later capitalize on this Night Attack.  According to chronicler Sa‘d al-Din,

On a dark night, his [Vlad’s] heart full of wickedness and accompanied by his Infidel army, he flew like a black cloud toward the army of the wise Sultan, attacking him…. At midnight, the army of Wallachia started like a torrent toward the Imperial camp and made their way on horseback into the middle of the triumphant army.

The 2014 movie, Dracula Untold, especially relies on this account, as it has a scene of Vlad—who by then is a blood-sucking denizen of the night—literally flying like a black cloud and terrorizing the Ottoman army.

The Night Attack remains one of the most desperate and heroic “military episodes in the history of the Ottomans,” writes historian Nicolae Iorga, for “until then there did not occur in Turkish history so bold an attack against the person of the sultan himself.”  Back in his mountain hideout following his history-making sortie, “Dracula himself began to look over those who had returned with him from that battle,” says the Old Russian Chronicle, adding: “to the man who was wounded in the chest he would give great honor and accolades, but the man who was wounded in the back, that man he would have impaled on a stake through the anus, saying, ‘You’re not a man, but a woman.’”

As for Muhammad, to save face and sate his rage, with the crack of dawn the sultan ordered his men to hunt down as many Wallachians as possible. Thousands of destitute men were hauled before him and ritually slaughtered. Their heads were “cut off to nourish swords,” writes Tursun Beg, who was there, with the following explanation: “This is why, as the Koran says, the powerful sword must fall upon them and split them in two: 3,700 Infidels were brought to the Sultan alive and then cut in two.”

The war would continue with an even more terrifying conclusion.

This article was abstracted from Raymond Ibrahim’s new book, Defenders of the West: The Christian Heroes Who Stood Against Islam (which includes a chapter on Vlad).  Ibrahim is a Shillman Fellow at the David Horowitz Freedom Center, a Judith Rosen Friedman Fellow at the Middle East Forum, and a Distinguished Senior Fellow at the Gatestone Institute. 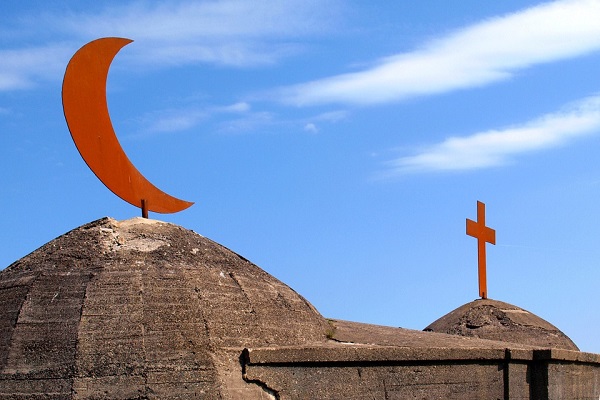