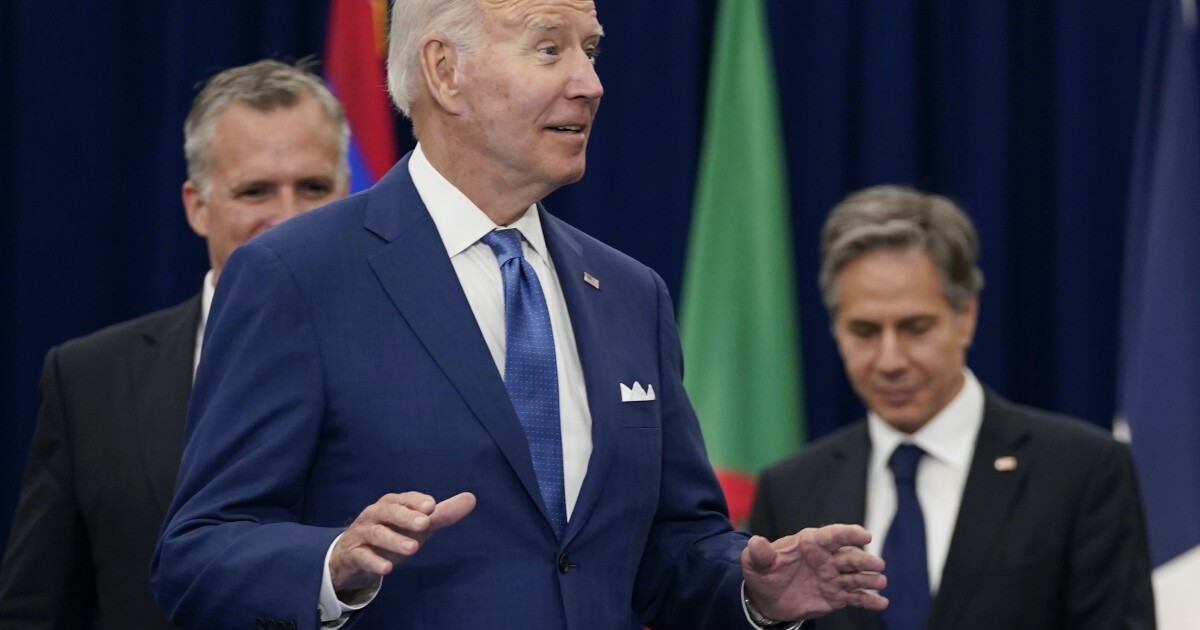 The White House is putting a positive spin on the economy ahead of the midterm elections, arguing that President Joe Biden’s policies haven’t caused inflation but rather put the United States in a better position to fight high consumer prices.

The White House is putting a positive spin on the economy ahead of the midterm elections, arguing that President Joe Biden’s policies haven’t caused inflation but rather put the United States in a better position to fight high consumer prices.

For Democrats defending razor-thin congressional majorities this November, the question is whether voters buy it.

“What we’re trying to say is that the economy is in a better place than it has been historically,” White House press secretary Karine Jean-Pierre told reporters. She added, “We feel that we are in a good position to take on inflation.”

Biden has said much the same thing. “We’ve laid an economic foundation that’s historically strong, and now we’re moving forward to a new moment where we can build on that foundation to build a future of stable, steady growth, so we can bring down inflation without sacrificing all the historic gains we’ve made,” the president said. “There’s every reason for the American people to feel confident that we’ll meet these challenges.”

The president made these comments after the economy added 390,000 jobs last month, according to the latest data, the weakest since last year. The unemployment rate stayed at 3.6% in May, the lowest level in decades.

“As we move to a new period of stable, steady growth, we should expect to see more moderation,” Biden said.

Voters seem skeptical. Biden’s job approval rating on the economy is just 34%, according to the RealClearPolitics polling average. Some individual surveys are even worse, with a Quinnipiac poll showing Biden’s economic approval underwater by 35 percentage points.

The same pollster found that a 34% plurality regarded inflation as the country’s most pressing problem, twice the percentage that picked gun violence, a top Democratic priority. A majority responded to a poll commissioned by the Washington Post and the George Mason University’s Schar School of Policy and Government by saying they expected inflation to get worse.

Inflation, now running at a 41-year high, is outpacing wage growth. Biden could previously tout GDP and unemployment as economic positives, but the economy shrank in the first quarter of this year. As the Federal Reserve raises interest rates to fight inflation, economists aren’t ruling out a recession. Stagflation made Jimmy Carter a one-term president in 1980 and would be bad for Democrats this year.

Former Treasury Secretary Larry Summers, a leading economic adviser to Democratic former Presidents Bill Clinton and Barack Obama who unsuccessfully warned Biden inflation was going to be a serious problem, is among those predicting a recession. He also co-authored a paper arguing that inflation is closer to what it was in the 1970s, an economic trend that sent Democrats into the political wilderness.

Even if these predictions turn out to be wrong, the White House risks running counter to hardwired public perceptions of the economy. “That’s akin to telling someone whose house is on fire that the mailbox survived without a scratch,” said Republican pollster Neil Newhouse.

“The Biden administration is trying to distract Americans from what is in front of their faces every day — that prices continue to go up with no end in sight,” Newhouse said. “Messaging isn’t going to solve the problem that Democrats have on the economy.”

This challenge is complicated by the fact that Biden has tried to credit his two biggest legislative accomplishments, the partisan $1.9 trillion American Rescue Plan and the $1.2 trillion bipartisan infrastructure package, with everything good going on with the economy while denying any responsibility for inflation.

But unemployment was low for most of former President Donald Trump’s term before the pandemic, and the lifting of the COVID-19 business restrictions was always going to be followed by robust growth. “We are about to see the best economic data we’ve seen in the history of this country,” top Obama economist Jason Furman predicted in 2020.

Inflation, though fed in part by spending that predated Biden, is a more recent problem younger consumers, a key Democratic voting bloc, are experiencing for the first time.

“They are pathetic,” Republican strategist John Feehery said. “Their chief plan to deal with gas price inflation is to get people to buy electric cars. This might be history’s most out-of-touch White House.”

Biden has tried to communicate to voters that inflation is now his highest domestic priority. In doing so, he has conceded the economic news could get worse before it gets better.

“The most important thing we can do now to transition from rapid recovery to stable, steady growth is to bring inflation down,” Biden wrote in a Wall Street Journal op-ed. The pace of job growth may slow as a result, he added.