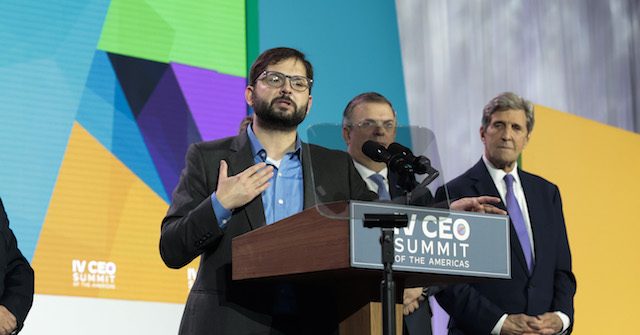 Leftist President Gabriel Boric of Chile appeared not to recognize President Joe Biden's special climate envoy John Kerry at a Summit of the Americas event on Thursday, railing against America for not partaking while Kerry was only two seats away from Boric.

Leftist President Gabriel Boric of Chile appeared not to recognize President Joe Biden’s special climate envoy John Kerry at a Summit of the Americas event on Thursday, railing against America for not partaking while Kerry was only two seats away from Boric.

Boric became president after a nasty election in December in which violent leftists assaulted multiple of his conservative opponent’s campaign events, the culmination of three years of leftist rioting that began as an alleged protest against Santiago public transportation fare hikes. Boric, 36, rose to prominence as a Marxist student protester and has described himself in the past as “to the left of the PC [Communist Party].”

This week’s Summit of the Americas is his first diplomatic tour outside of the country since becoming president, and of particular political importance given his collapsing approval ratings at home despite being in office less than a year. The gaffe, which Boric appeared visibly embarrassed by, will likely do little to reassure concerned Chilean skeptics.

Boric was speaking at the “CEO Summit of the Americas,” an event on Thursday bringing together several Latin American presidents and envoys of other represented nations, and in particular addressing the signing of an “International Coalition to Connect Marine Protected Areas.” Western South America has seen a major escalation in illegal fishing and maritime ecological destruction in the past decade almost entirely tied to Chinese ships illegally plundering the sovereign waters of American countries. Chile, Ecuador, and Argentina have been most severely impacted.

In his remarks, Boric emphasized that countries like China must be held responsible for playing a role in the preservation of the environment, in addition to several other non-Hispanic nations.

“If we are capable of using our leadership to protect what is all of humanity – because this is not just about our countries, this is about all of humanity,” Boric asserted, “we are going to be contributing in a decisive way and we will be able to say with more authority to developed countries – like the United States, which is not present here, like the European Union, like China and like India, that they have the duty to make more efforts to protect our environment.”

Several minutes later, after receiving a note on a piece of paper from an aide, Boric corrects himself.

“I’m sorry, a small correction on my part. When I made a mention of developed countries to pressure them here, I was thinking of Europe, China, India, I mentioned the United States … the United States is present here, with John Kerry,” the president said. “And that is also tremendously important for us. Canada and the U.S. are part of the G7 and I have no doubt that from that leadership, as well, we will be able to push the other developed countries to add themselves to this.”

Kerry, receiving the final word from the moderator, responded, “I just have one question: where is the beer?”

Boric has otherwise had relatively smooth engagement with the Biden administration, including the president himself, this week. The Chilean leader was one of several leftists initially suspected to boycott the Summit of the Americas in protest of the dictatorships of Cuba, Venezuela, and Nicaragua not receiving an invite. The summit is an event convening the leaders of the Organization of American States (OAS), a coalition that requires its members to promote democracy, so dictatorships are technically not allowed. Despite this, Boric, Argentine President Alberto Fernández, Mexican President Andrés Manuel López Obrador, Peruvian President Pedro Castillo, and Bolivian President Luis Arce were all rumored to be considering skipping the event in protest. Ultimately, however, only López Obrador and Arce failed to attend.

Boric did criticize that the hemisphere’s dictatorships were absent.

“We should all be here and we are not all here,” Boric said during remarks on Friday. “I don’t like the exclusion of Cuba, Venezuela, and Nicaragua because it would be different to discuss, in a forum like this one with all countries present, the urgent need to free political prisoners in Nicaragua or the moral and practical necessity of ending the unjust an unacceptable blockade by the United States against the people of Cuba.”

In reality, the “blockade” affects only corporations — which, in communism, are all owned by the regime — and contains exceptions for medical and humanitarian aid.

Boric’s remarks notably differed from López Obrador’s complaints, however, as the latter dismissed human rights concerns in Cuba during his remarks to confirm his boycott on Monday, stating plainly, “so what?”

Boric condemned the Castro regime in an interview with Telemundo this week, asserting, “There are prisoners in Cuba [detained] for thinking differently and that for us is unacceptable.”

During his meeting with Biden, Boric said in a statement on Twitter that the two “discussed continental strategies to face the high cost of living for our peoples.”

“As long as the U.S. understands that Latin American countries are its equal and never subordinate, we can work together,” Boric wrote. “It is a necessary condition for a new continental agreement to promote democracy, human rights, and the struggle against climate change.” 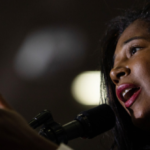 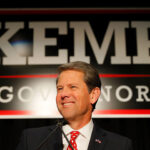