I do try to respect President Reagan’s 11th Commandment: “Thou shalt not speak ill of thy fellow Republican.”  I know ideological litmus tests rub some people the wrong way.  I get that turning internal disagreements into political losses is self-defeating.  I agree that priority number one is to beat back the Marxist hoards pushing America to the cliff’s edge.  And it sure is nice to pat ourselves on the back for having a “big tent” open to everyone.  But…you knew it was coming…I sure wish we could move on from Mitch McConnell.  Or rather, I wish we could find an effective way to compel Republican senators to move on from McConnell (and his lackeys) as their leader.

I don’t like him.  I don’t like the way he conducts business in the Senate.  I don’t like his imperious nature and his backroom double-dealings.  I don’t think he represents the vast majority of Republican voters, and even worse, I don’t think he even cares.  I find him off-putting and arrogant and a terrible spokesperson for the Republican Party.  I do not think he has ever convinced a single non-Republican voter to come onboard.  I’m not certain he believes in much aside from the accumulation and maintenance of raw power.  And to the extent he actually does have sincere beliefs, those beliefs seem hopelessly aligned to an outdated Republican Party still grazing in the country-club safe spaces of bourbon-swilling “elites.”

His fingerprints are all over the Senate’s new gun control bill, of course, because nothing gets done on the Republican side unless Mitch first snaps his fingers or gives his blessing.  His control over Republicans in the upper chamber looks more mafia don than minority leader.  So once again Senate Republicans are marching down a path in which they will congratulate themselves for having taken a “historic step” in fighting “gun violence,” while doing nothing other than undermining the Bill of Rights and leaving their voters more vulnerable as future targets for Democrats’ lawless bureaucratic harassment.  (Tell me that McConnell and his boys don’t secretly enjoy the idea of grabbing guns from the freedom-minded Tea Party and MAGA Americans they despise.)  Well done, Senate Republicans!  Thanks for habitually rewarding red state voters with the vomitous stench of betrayal.

If McConnell’s efforts to curtail the Second Amendment don’t prove him deeply unsuited to lead the New Republican Party during these uncertain times, consider a few additional reasons:

The Russia collusion hoax was Obama and Hillary’s baby (uh, gross), but Mitch gave it legitimacy by pretending that it deserved serious investigation.  Using Richard Burr’s Senate Select Committee on Intelligence to hide the FBI’s illicit spying operations against candidate Trump while backing the two-year Mueller Inquisition allowed McConnell to wield some power over President Trump (who had uniquely come into high office beholden to none).  By doing so, he helped divide the nation further than ever and betrayed all the Republican voters (a common theme here) who had succeeded in finally putting an America First candidate into the White House.  Imagine how much better off the country would have been had McConnell firmly rejected the Democrats’ absurd allegations that Donald Trump was a Russian spy.  Imagine how much more successful President Trump would have been in executing his MAGA policy agenda.

No matter how many times President Trump went out of his way to keep McConnell happy (making his wife Transportation Secretary, choosing mutually agreeable Supreme Court nominees, acceding to some of McConnell’s unsavory anti-MAGA picks for elected office), the Establishment Republican never thought twice before stabbing him in the back after January 6.  It is rumored that McConnell was “exhilarated” with the media’s framing of that day as a “terrorist attack” and “insurrection” because he confidently believed it would “finally, totally discredit” Donald Trump and return control of the Republican Party back to the same Chamber of Commerce China appeasers who have sold out America’s labor force for decades.  Had polling not ultimately cowed him, he certainly would have joined Mitt Romney in voting for Trump’s second farcical impeachment.  McConnell could have defended the president’s right to freely express his opinion that the 2020 election was a sham, but that would have put him on the side of free speech and against his good friend, Joe Biden.

I’m thrilled that the Republican Party is becoming the home of hardworking Americans.  I think the future of the party is Main Street, not Wall Street.  I think it’s a great time to fight back against “woke” corporations and the multinational institutions that push foreign interests at the expense of everyday Americans.  A self-sufficient America is a secure and prosperous America.  An America that prioritizes manufacturing, industry, and innovation over imports is an America with an expanding middle class.  An America that produces real products and not simply financial instruments traded by investment banks is an America with a real future and real wealth.  And Mitch is not suited for this transition.  He’s what most Republicans have come to despise: a politician who does the bidding of corporate lobbyists, not his constituents.  He’s a globalist in an America First party.

(4) War hawk with a China problem:

Biden’s Build Back Better boobery has unleashed inflation hell.  His unguarded borders are flooding America with millions of illegal immigrants.  Americans are suffering.  What does McConnell believe is the biggest problem on the planet today?  Ukraine.  After two decades of sending Americans to sandboxes in Asia and the Middle East to accomplish questionable objectives, now he and his war hawks desperately want to engage Russia on the battlefield.  I don’t think he or his acolytes realize how few Americans have their backs.  After pushing military adventurism abroad with little gain, they are not trusted.  Their new “woke” military is not trusted.  And nobody trusts McConnell’s obsession with Russia when he turns a blind eye to China’s genocide, market manipulation, and aggression.  As Peter Schweizer has well documented, McConnell’s family has made too much money from the Chinese Communist Party to know who his real friends are.  Should war with China become inevitable, McConnell is a liability.

He helped get Alabama Democrat Doug Jones elected by attacking conservative Republicans Mo Brooks and Roy Moore.  He handed over senate seats in Arizona and Georgia by insisting that those states’ conservative bases back the unpalatable candidacies of Martha McSally and Kelly Loeffler over local favorites.  He’s forced Lisa Murkowski on America.  By interfering in state elections to tank the rise of more conservative candidates, McConnell has cost Republicans Senate seats time and again.  His my way or the highway approach to Senate elections has given Chuck Schumer a majority.  Even worse, the few true conservatives in the Senate have been left vastly outnumbered by moderate milquetoasts and Romney-like quislings.

Establishment Republicans bemoaned their inability to attract black and Hispanic voters for years.  You know who finally succeeded in appealing to a much broader voting coalition?  Right!  Donald Trump.  For all their underhanded moves to weaken his presidency and destroy his influence within the party, McConnell Republicans have benefited greatly from Trump’s direct appeal to voters disenchanted with the Democrats’ Marxist ways.  You know who doesn’t remotely appeal to that coalition?  Yep.  Mitch McConnell.  McConnell has always struck me as an anachronistic throwback to a nineteenth century party boss before the invention of radio or television.  He lacks gravitas, eloquence, charm, or even the inkling of an inspiring demeanor.  He rules through fear and punishment, and voters do not like or trust him.

For that last reason alone, he should be dismissed as an unhelpful relic of Republicans’ past. 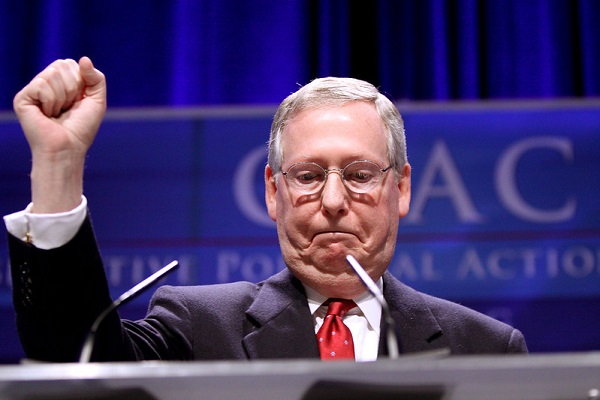