Colonial Williamsburg in Virginia has apparently learned nothing from a related disastrous decision by Disney's woke leadership.

According to an article in the Federalist, the popular tourist destination of Colonial Williamsburg in Virginia (one of the largest living history museums in the world) has apparently learned nothing from a related disastrous decision by Disney’s woke leadership.  The author said, “…it has faithfully depicted the founding culture of America in a meticulously recreated, and often re-enacted, Revolutionary-era capital.  This depiction included America’s undeniably traditional, Western, largely Judeo-Christian roots.  But now Williamsburg has gone woke.  In doing so, its leadership and staff are displaying conspicuous enmity toward the highly reasoned position held by America’s founders — a position at odds with today’s LGBT dogma.”

Williamsburg was the original state capitol of Virginia, but the Revolutionary War convinced the government to move the capitol to less militarily vulnerable Richmond.  Left behind were many of the original colonial-era government buildings creating a ghost town and by the 20th century most required serious repairs.  However, thanks to a visionary endowment in 1926 by the John. D. Rockefeller Jr. foundation, a massive preservation effort was started.  Since then, it has been operated by the Colonial Williamsburg Foundation, a not-for-profit, educational institution.  I went there as a child, took my daughter and most recently took my grandchildren.  I repeated the process at nearby Jamestown.

Although tourism seriously declined during the pandemic, creating a financial strain, the area continues to attract and impress thousands of visitors annually from all over the world.  However, guests attending this June may be in for a surprise.  Whoever made the programming change had to really contort the truth to allege some historical LGBT contributions.  Following is a small sample reported by the Federalist:

“It’s not merely during Pride month, which Williamsburg now celebrates. Colonial Williamsburg has established an ongoing Gender and Sexual Diversity Research Committee to uncover the contributions of “gender and sexual minorities.”

“The committee’s web page contains four blog posts yielding the product of their “research” so far. It is both thin and adversarial. One article, “Pride and Prejudice: Honoring Historic LGBTQIA+ Voices,” is written as though only backward people think there are two sexes grounded in biology. It focuses mainly on one individual, Anne Lister, who did not live in Williamsburg or even during the colonial era.

Another article, “Standing on the Shoulders of Giants,” says the intention of the Williamsburg Gender and Sexual Diversity Research Committee is to undo “suppression” with an “act of rebellion” and “justice” to the end of “celebrating our progress” while “stand[ing] on the shoulders of [LGBT] giants.” It declares, “May we honor them, may we raise them, may we become them.”

Did the board of directors in Williamsburg wish to earn extra points for their ‘ESG’ score by adding a gender themed woke doctrine to colonial history?  The recent lesson learned by Disney was certainly ignored. 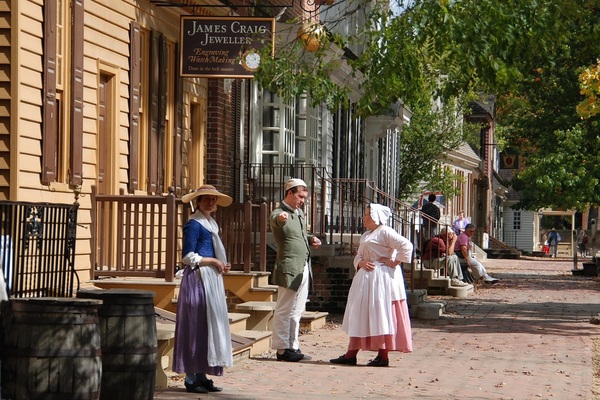 This was not the first time Virginia history was tailored to fit a woke narrative.  The ‘CRT’ side of woke was helped by the negative press generated by an incident at the 400th Anniversary celebration in Jamestown held in 2019 to recognize it for establishing the first democratic legislature in America.  There was little interest in this event outside of Virginia until President Trump accepted an invitation to speak from former Governor Ralph “Blackface” Northam (D).  The event was marred by a heckler and boycotted by Virginia’s version of the Congressional Black Caucus and black mayor of Richmond, Levar Stoney (D).

The protesters supposedly objected not because of Trump’s presence, but rather because they wanted it known that coincidentally that same month in 1619, an unsolicited group of “20-odd” captured African slaves were traded to the Jamestown settlers and this event legalized slavery in the New World.  The presence of Trump plus the boycott gave the protesters plenty of negative nationwide news coverage.  The publication of “The 1619 Project” by the New York Times closely followed.

The claims made by the New York Times history are intended to put American history in a bad light and many of their claims are questionable.  However, The Virginia Mercury published a much better researched, less biased article on this contentious subject.  The Mercury asserted, “Much of what we’ve been told about Virginia’s 1619 first Africans is wrong.”  For example:

“In late August [1619], one of the English ships, the White Lion, showed up at Point Comfort at the mouth of the James River in present-day Hampton and sold perhaps 30 slaves for desperately needed supplies.

Was that the beginning of slavery in the New World?

No. Historians say the Spanish had enslaved Africans in present-day Latin America for more than a century.

The beginning of slavery in what became the U.S.?

No. The Spanish took enslaved Africans to a settlement in the present-day Carolinas in 1526. The slaves rebelled, and the settlement failed.  Also, the Spanish took African slaves to St. Augustine, Fla. — which, unlike the Jamestown colony in Virginia, still thrives — in 1565.

“Americans tend to forget about the Spanish colonies in North America and focus only on the English heritage,” said Adam W. Dean, a University of Lynchburg historian who specializes in slavery, the Civil War and Reconstruction. (snip)

In a sense, there are two stories here: The tale of what happened in 1619, and the story behind the story: How misinformation got spread, shaky historic “firsts” emerged by shedding qualifiers that convey truth, and confusion over the event’s significance arose in part from the public’s desire for simple answers.”

If interested in diving deeper into the history, I recommend reading a report titled “1619: Virginia’s First Africans” prepared by Beth Austin, Registrar and Historian, Hampton History Museum.  Do not expect to find a simple answer though.  Disagreements regarding this history will continue as long as it provides a political advantage.

Also, do not forget there were other attempts by the woke to alter Virginia history.  During the 2020 pandemic, the BLM-inspired rioters in Richmond (once the capitol of the Confederacy) changed their tactics from burning cop cars, busses, and private property to the removal of the century old statues of Confederate generals on Monument Avenue.  A drive down Monument Avenue was once a popular tourist destination rivaling the beauty of old Europe.  The 2015 UCI Road World Championship bicycle race was held in Richmond and the planners did not hesitate to include Monument Avenue in the course layout.  However, the success of the 2020 riots has transformed this avenue with its remaining stately homes into an ordinary street stripped bare of its character with the finesse of a passing tornado.  At least with the removal of the statues, gone are most of the sign-carrying protesters, pornographic graffiti covered Jersey barriers and vandalized statue pedestals.  But also gone are the tourists.

The Virginia history revisionists will never rest.  By constantly bringing up the Founders’ record on slavery, George Washington, Thomas Jefferson, and other Virginia Founding Fathers remain in the crosshairs of those who wish to fundamentally transform America.  George Washington University just announced its sports team name (Colonials), and mascot (a George Washington Muppet-like costume) will be changed because it may offend.