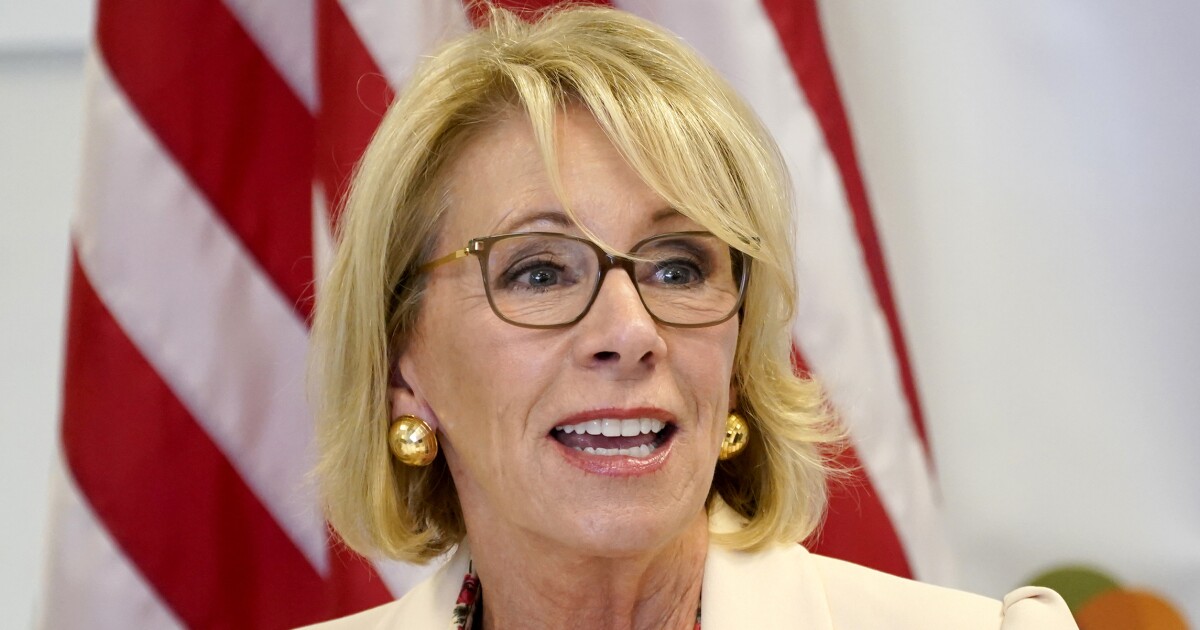 Republican leaders are predicting that President Joe Biden will live to regret "canceling" student loans if he does follow through with executive action, which the White House has been teasing for months.

Republican leaders are predicting that President Joe Biden will live to regret “canceling” student loans if he does follow through with executive action, which the White House has been teasing for months.

Biden is weighing whether to shift $10,000 or more per borrower of student loan debt to taxpayers, though party leaders such as Senate Majority Leader Chuck Schumer (D-NY) are pushing him to go closer to $50,000. While the latest reports have an income cap of $150,000 for individuals and $300,000 for married couples, any such action may turn off the two-thirds of families who never took out student loans.

“What does it say for all those folks? Boy, you were really stupid here,” former Education Secretary Betsy DeVos told the

DeVos and other GOPers are thus predicting a “blue-collar backlash” should Biden shift student loan debt from borrowers to taxpayers. While Democrats hope the move energizes young voters in a nonpresidential election year, just 13% of people have student loan debt overall.

Any student loans the president or Congress acts on are not truly “canceled” but absorbed by taxpayers and lumped into the national debt.

The Trump-era education secretary also pointed out that the move, if it happens, will do nothing for the next generation of borrowers and instead only “buy a bunch of political points.” One of the solutions she proposed instead is for the federal government to get out of the student loan business entirely.

Even some top Democrats tend to agree
. While Democratic Senate leadership is all in and pushing Biden to go bigger, House Speaker Nancy Pelosi (D-CA) sounded more like DeVos in comments she gave in 2021. Pelosi said Biden cannot legally address student loans on his own and suggested she opposes the idea in any case.

“Suppose … your child just decided they, at this time, [do] not want to go to college, but you’re paying taxes to forgive somebody else’s obligations,” she said last July. “You may not be happy about that.”

On the flip side, there is some evidence of support from Republicans, especially younger ones, for loan shifting. A recent poll from the Student Borrower Protection Center found that 60% of Republicans ages 30-39 support Biden forgiving student debt, as do small majorities of Republicans aged 18-29 and 40-49. That GOP support plummets among older age groups.

Fox News pundit Tucker Carlson has been an outspoken advocate of student loan cancellation, saying it affects basic life decisions such as getting married or having children, and he has called on Congress to act.

The prevalence of the student loan burden among younger, educated workers is evidenced by reports that White House staffers collectively hold as much as $4.7 million in loans, raising ethical questions about self-dealing on Pennsylvania Avenue.

Republicans have cried foul over staffers who would personally benefit from Biden lifting their loan burdens, with Richard Painter, a University of Minnesota law professor and the chief ethics lawyer for President George W. Bush from 2005 to 2007, saying the issue could be not just unethical but criminal as a violation of 18 U.S.C. 208.

But while the White House may be staffed with a number of student loan holders, the group makes up a small minority relative to the rest of the country. That dynamic may come back to bite Democrats this fall.

“I think Dems are wildly underestimating the intensity of anger college loan cancellation is going to provoke,” Niskanen Center senior fellow Damon Linker wrote in a widely shared tweet
. “Those with college debt will be thrilled, of course. But lots and lots of people who didn’t go to college or who worked to pay off their debts? Gonna be bad.”