Cleaning up Joe Biden's fumbles and missteps is the price tag attached to a high maintenance head-of-state in constant need of memory care and a full body harness.

It has taken just a year and a half for Joe Biden to mature into a caricature attached to a teleprompter.  It is a sad state of affairs that our allies and enemies have learned not to take Biden at his word, instead withholding judgement until White House adjutants have issued clarifications, walk-backs, or reversals.  Whether off on road trips or at 1600 Pennsylvania, cleaning up the fumbles and missteps is the price tag attached to a high maintenance head-of-state in constant need of memory care and a full body harness.

Off the leash and detached from script, Joe Biden is much like that itinerant toddler at a church service, prone to temper tantrums and unintelligible outbursts.  Whether acting out his olfactory indecorums with females of all ages, fumbling the names and titles of dignitaries and confidantes, including his own wife, wandering away from the rostrum in search of a handshake or a graceful exit, promoting dangerous outcomes by undervaluing the competencies and ill intent of our adversaries, or just saying the quiet part out loud, the leader of the Free World has become a punchline on the world stage and a byline in his own administration.

The liberal media have always highlighted the strengths and weaknesses of presidents contingent upon their party affiliation.  The media was quick to pillory Gerald Ford for being clumsy and oafish, labored unsuccessfully to pin Iran Contra on Ronald Reagan while detesting his anticommunism, and downright hated all things Trump, right down to the ruddiness of his complexion.

Making constant amends for Biden’s mental lapses and unforced errors has exposed a shadow regime within the administration.  Their redresses mock the body politic by acknowledging that the only person not formulating policy is the one constitutionally empowered to do so.

After pulling the rug out from under the electorate in 2020, Democrat kingmakers knew they were getting an old and broken toy when they put Joe Biden behind the Resolute Desk.  He was a kompromat and cat’s paw for the Russia-China-Iran axis, a hidden partner in the crooked business deals of his drug-addled son, and the patriarch of a family consumed by greed on a global scale.  In the search for a Trojan Horse to force feed a progressive agenda to a right leaning, free market-loving constituency, Joe had all the right stuff.  Although hamstrung by latter-stage cognitive issues aggravated by age and past infirmities, he still displayed a willingness to tack hard left in pursuit of power and was comfortable speaking fabrication to truth.  The perfect beard, he persists in political fantasy even in the presence of facts. 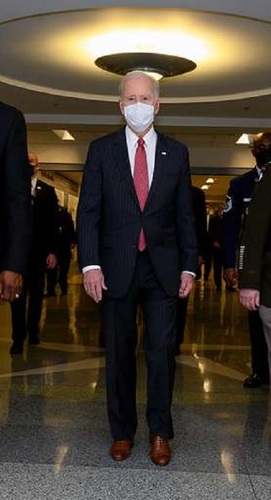 Biden reveals the vassal in unscripted moments like, I’m not supposed to be answering all these questions, or, they’ve given me a list of people to call on, or, they’re not going to let me read a children’s book. These statements smack of submission to obscure and unelected authorities with the power to craft both script and policy.  Two-thirds of Americans are shaken by both belief and observation that the messenger has no meaningful role in writing the message or running the country.

Staffers brazenly exhibit unprecedented and extraordinary authority to pull the plug on the mic during Biden pressers.  The First Lady also plays a role, whispering corrections during memory goofs, tugging on his shirtsleeve to pull him out of harm’s way, or, or disparaging him on the world stage (see here and here).  Recently, Biden was reminded of his de minimis position in the administration and publicly humiliated during the recent visit of Barack Obama.

Pushing Biden out front as a patsy, a cabal of Obama retreads, Sanders’ acolytes, and even Peter Cottontail, are framing the public narrative while advancing an Orwellian agenda using cabinet-level authorities to rule by fiat and avoid congressional backstops.  Through the politique du jour of the CDC, we now know that we were suffered for fools during COVID, the American Left’s Stalinistic experiment in rigid authoritarianism.

Those pulling the levers of power are warping American domestic and foreign policy through the spectrum of green activism and leveraging the regulatory powers of the alphabet agencies to gin up fears of a climate apocalypse that will generate environmental justice subsidies to Democrat constituencies while driving the middle class into servitude.  Saving the planet drains the coffers of American prosperity while ignoring the fact that all the windfarms, solar panels, reduced greenhouse emissions, and international accords over the next thirty years won’t lower the global temperature by more than seventeen-hundredths of one degree.

With the midterms looming, the White House is running hard and fast against the will of the American people.  Recent court appeals to reinstate the mask mandate on airlines have little to do with the effectiveness of such coverings, and everything to do with preserving the regulatory powers of the CDC to impose health policy sanctions, a tool of great utility in abusing and upending the electoral process.  Much of the same can be said about the DoT and its odious intentions of inculcating the goals of Build Back Better into the supply chain crisis, the EPA on suppressing gas and oil exploration, and the role of the DoJ in continuing to persecute the January 6th demonstrators while many cities descend into crime chaos.

Making the circumstantial case that Joe Biden is asleep at the switch is an uphill battle given a lack of journalistic curiosity and integrity, the censorship of conservative pundits, opinions, and evidence, and woke pressures against political heresy that destroy reputations, careers, and lifestyles.  Still, prima facie evidence is overwhelming that the inmates are running the asylum.  The Republicans see no reason to interfere, believing that sitting on their hands and not being Democrats will bring home the midterm prize.

History will lament a time when American domestic and foreign policy was lacking a rudder, putting the whole of the Free World at risk and affording international warlords the opportunity to expand their territorial ambitions and global market influence.  It is no longer far-fetched to believe that a compromised presidential election put an unwitting catalyst for progressivism in the Oval Office, perhaps wagging the dog to divert from the backroom schemes still steered by a former president who first planted the goal of fundamentally transforming the country.