But of course, measuring and comparing past wrongs is a game of reductio ad absurdum that ignores the present and handicaps the future.

California, which was never a slave state, is now on a path to grant reparations to the descendants of slaves. But if we’re being fair, there’s a group that deserves reparations first: Women.

Women were America’s first and last slaves. Marriage turned women into freedomless, voiceless, chattel slaves, who needed permission to leave home. A wife’s assets, children, and body were her husband’s property. Spousal rape wasn’t a crime. Spousal rape laws were first repealed in 1975, and all states did so by 1993, but eleven still have loopholes or have not criminalized it.

If a husband wanted sex, a wife could be legally subject to corporal punishment for disobeying. Laws permitted beating disobedient wives into the late 19th century. Afterward, the practice persisted, and it was rarely punished.

In the late 20th century, “battering of women by husbands, ex-husbands, or lovers ‘[is] the single largest cause of injury to women in the United States.” Women began campaigning in 1850 to end the battering and, in 1994, Congress finally passed the Violence Against Women’s Act (VAWA) to provide support for victims and acknowledge that domestic violence and sexual assault are crimes.

Single women technically had more freedom than married women but, practically speaking, it was almost impossible to survive. Before the industrial revolution (1820-1850), wage jobs for women were limited to domestic help. Domestic servants worked 24/7, were coerced into sex and earned about $1 per week. This drove many into “White slavery” (i.e., prostitution). With the industrial revolution, women worked in sweatshops 80-100 hours per week, earning $1-$3 per week. Living costs averaged over $10 per week, so they lived in squalor or married, becoming virtual slaves.

Raping a single woman over the age of 12 (or as young as 7, depending on the age of consent in most states until 1890) was virtually legal. Many raped victims were denied justice because they lacked two credible witnesses. If they went to court, they faced the public shame of being an indisputably dishonored non-virgin. They could only absolve this stigma by leveraging marry-the-rapist laws.

The stigma of dishonorable women has persisted. It’s reflected in the low percentage of females alleging sexual assault who find justice.

Surprisingly, Black slaves accused of sexual assault often found justice and sympathy from male judges. “Of the 37 appeals by African American men prosecuted for rape or attempted rape of a White female that appear in the public records of state courts in the antebellum south, 22 were successful…Five were free blacks, one was a quadroon and the rest were slaves.” A slave’s master footed the legal defense for his slaves; they were his valuable property. Meanwhile, most alleged victims were, by default, dishonorable women, without sponsors, value, resources, or sympathy. Black slaves were at the bottom of society and so were most White women.

In 1865, Black slaves were emancipated, but women remained virtual chattel slaves. In 1869, the influential philosopher, John Stuart Mill weighed in. “The wife is the actual [legal]bond-servant of her husband…. No slave is a slave to the same lengths…. She may know that he hates her…it may be his daily pleasure to torture her, and…claim from her and enforce the lowest degradation… contrary to her inclinations.” Mills had no influence.

In 1870, Black men got the right to vote and, while Jim Crow curtailed eligibility, Black men outside of its reach voted. Women had to wait another fifty years and, if their state required voters to own property, married women had no property and, therefore, no vote. Only in 1974 were head and master laws, giving husbands sole authority over joint property, declared unconstitutional.

Voters had a voice through their political representatives. In 1870, Congress had its first Black congressman. In 1916, women had their first congresswoman. In 2022, Blacks and women represented 12.4% and 50.5% of the U.S. population, respectively. In Congress, Blacks hold 11% of seats while women hold 27.9%. Blacks hold 24% of big city mayor positions and women 31%. Blacks and women had their first supreme court justices in 1967 and 1981, respectively. In 2008, a Black was elected president. Women are still waiting.

The year 1964 was a tipping point for every group battling bias. For women, their inclusion in the Civil Rights Act of 1964 was an accident when a Virginia congressman, trying to kill the bill’s passage, added protections for women. 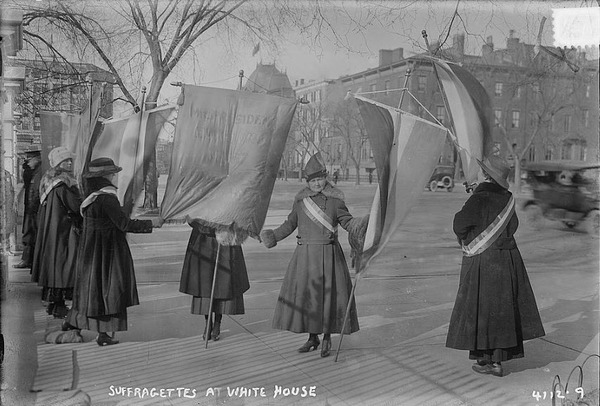 Image: Suffragettes at the White House. Library of Congress.

The biggest gains for women have come from equal access to education. Educating women had never been a priority because it wasn’t needed for housewifely deeds or jobs as domestics. In 1826, Dartmouth had its first Black male graduate but only admitted women in 1974. Other Ivy Leagues followed a similar pattern. Admitting women was helpful but, in many universities, women had higher hurdles for admission, received limited financial aid, and faced quotas or exclusions in male disciplines like medicine, law, and hard science. These discriminatory practices were addressed only in 1972 when Title IX withheld federal funding for universities that discriminated based on sex.

Excluding the ongoing issues of female safety, women finally had the same foundation for equality of opportunity as men. Fifty years later, women are as likely as men to have the education and experience needed to succeed in the C-Suite, where the male:female ratio is 3:1 and 10:1 for the top spot.

Some gripe that racism holds Blacks back from promotions, while women find favor. This limited “favor” is based on qualifications—not sex. Women have proportionately achieved 24% greater C-Suite progress than blacks. Corporate America weighs engineering and advanced business degrees for C-Suiters. Respectively, women are 32% and 152% more likely than Blacks to have these degrees.

Will women and Blacks achieve parity in positions of power with men and whites, respectively? It’s up to them. That is, achieving, not achieving, or exceeding parity are options that women and Blacks can self-determine. All Americans today have the same freedoms to advance in education; to alter or maintain family and cultural values; to work or not; and to achieve work-life balance or compete for the top.

For California to enact reparations based on historical injustices, the focus must extend beyond Blacks. Women have faced horrible injustices longer. However, Irish Catholics, Hispanics, Italians, European and Russian Jews, Chinese, and Filipinos also have histories of appalling persistent inequalities. For equity’s sake, reparations must meet an “egregious injustice” standard. Practices that were historically legal and globally unremarkable would not pass the test.

That standard covers everything described above. Additionally, practices that were subsequently denounced and remedied would not qualify either. The Civil War, the 14th, 15th, and 19th Amendments; numerous Civil Rights and Voting Rights acts from 1866 to 2006; the 1964 Immigration and Nationality Act; numerous expansions of Great Society programs since 1965; and Title IX all represent a denunciation of and remedies for America’s entire history of injustices to diverse people.

Using a reduced, sensible, and fair scope, no one deserves reparations, so America can abandon sacrificing its future on the altar of an unexceptional history of bias—a history, moreover, that has been supplanted by a globally exceptional record of anti-racism and anti-sexism.