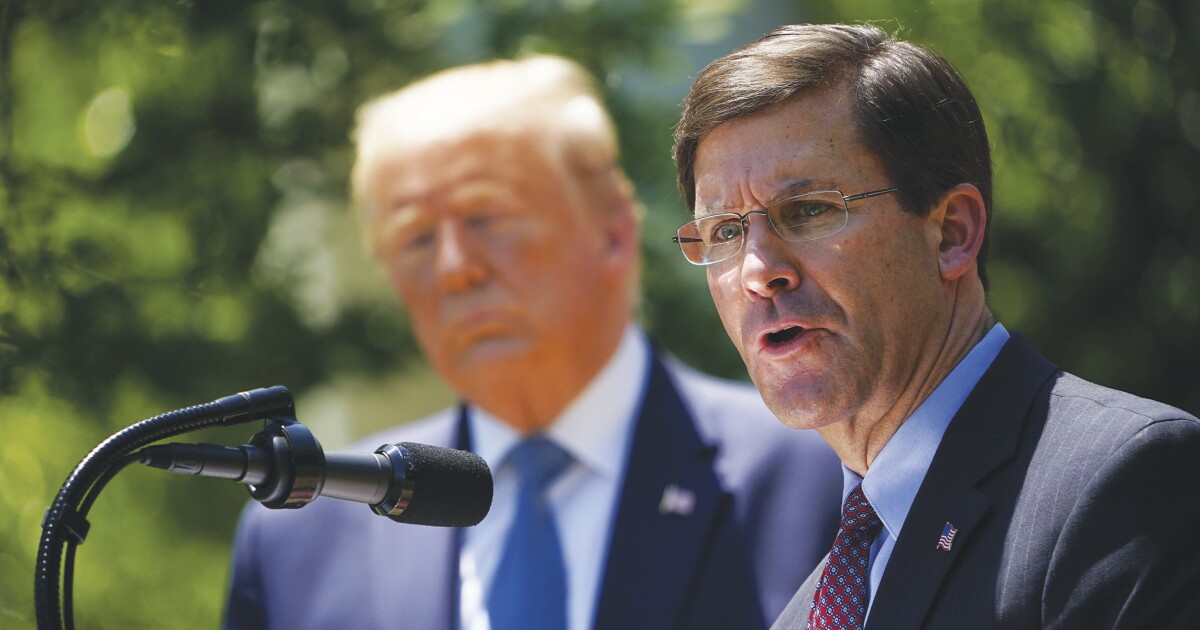 Chapter 15 of Mark Esper’s account of his 18 months as former President Donald Trump’s second defense secretary is titled “Making Lemonade,” a reference to the old saying about what to do when life hands you lemons.

Chapter 15 of Mark Esper’s account of his 18 months as former President Donald Trump’s second defense secretary is titled “Making Lemonade,” a reference to the old saying about what to do when life hands you lemons.

It could well have been an alternate title for A Sacred Oath, Esper’s pull-back-the-curtain, tell-all memoir about what he considered as his constitutional duty to turn what he saw as an endless litany of loony ideas coming from his “idiosyncratic, unpredictable, and unprincipled commander in chief” into policy he could defend as rational, legal, and in the legitimate national interest.

Throughout his book, Esper details how he would rally internal allies, often including Gen. Mark Milley, chairman of the Joint Chiefs of Staff, and leverage the inertia of the government bureaucracy to thwart Trump’s instinctual urges, or at the very least massage them into something he considered palatable.

Even before he was selected to replace former Gen. Jim Mattis, who resigned as defense secretary because he couldn’t support Trump’s Syria pullout, Esper could see storm clouds coming.

In 2019, when he was Army secretary, Esper was jolted by Trump’s bolt-from-the-blue order to evacuate all military dependents from South Korea, which he considered a precipitous and uncalled-for action that could spook North Korean leader Kim Jong Un and trigger a second Korean war with the nuclear-armed North.

“This was a dangerous game of chicken, and with nuclear roosters no less,” Esper writes.

Esper’s memoir falls into the “I was the most rational person in the room” genre, in which he portrays himself as the hero of his own story, the last line of defense against a president who “undermined our nation’s institutions and traditions, had little respect for the truth or propriety, and put himself above everything else.”

The book is a play in two dozen acts, each chapter a recounting something “reckless, or foolish, or just plain wrong” that Esper says he played a lead role in thwarting, circumventing, or normalizing while each time falling more and more out of Trump’s good graces.

As Esper skated on thinner and thinner ice, he thought he was about to be fired several times, in particular when he refused Trump’s demand to fire Lt. Col. Alexander Vindman, who was approved for promotion to colonel and headed to the Army War College but in Trump’s view had committed the unpardonable sin of testifying at his House impeachment hearing.

“Trump alleged that Vindman was ‘very insubordinate,’ received poor performance reviews, and ‘reported contents of my ‘perfect’ calls incorrectly,’” Esper writes. “Of course, none of these claims were accurate.”

Vindman short-circuited the showdown with the White House by abruptly retiring, blindsiding Esper, who has risked his job to keep Vindman’s name on the promotion list.

Such was Esper’s precarious work life, which he describes as “a series of minefields” that required “careful footwork not only to avoid stepping on one mine but to avoid triggering another in the process.”

In the chapter “Making Lemonade,” Esper recounts how he dealt with Trump’s surprise June 2020 directive to withdraw 12,000 troops from Germany to punish then-Chancellor Angela Merkel, an order he writes was “neither possible nor prudent.”

Germany, like about two-thirds of NATO nations, had not met the 2% of GDP goal for defense spending, and Berlin’s Nord Stream 2 deal with Russia grated on Trump. Still, much of his animosity toward Merkel, Esper says, was based on his fundamental misunderstanding of NATO financing.

“Germany does not ‘owe NATO billions of dollars’ or ‘owe us a tremendous amount of money for many years back,’” Esper writes. “He simply didn’t like Merkel. He called her a ‘weak’ leader and someone who had also ‘played the U.S. for suckers.’”

Esper came up with a way that would fulfill Trump’s desire but could be defended as increasing U.S. security by moving some troops to other European allies while bringing others home.

He announced his plan at a Pentagon news conference, explaining a complicated rationale about moving troops further east to deter Russia and consolidate headquarters, only to have the president undercut him at the White House by saying, “We’re reducing the force because they’re not paying their bill. It’s very simple.”

In other chapters, Esper provides new details of well-reported events, such as the June 2019 White House confrontation over Trump’s desire to invoke the Insurrection Act and deploy 10,000 active-duty troops to shoot protesters in the streets of Washington, if necessary.

As Esper tries to explain to Trump that domestic law enforcement is the purview of the National Guard, Trump only gets more worked up.

“We look weak,” he rants. “The country looks weak. You are losers! You are all f***ing losers!”

At one point, Trump tries to put Milley in charge of the response, unaware the chairman of the Joint Chiefs of Staff is an adviser to the president and not in the chain of command.

“The chairman quickly leaned back in his chair, raised his hands in a ‘don’t shoot’ fashion, and said wide-eyed, ‘I’m an adviser, Mr. President. I don’t command troops. I’m not in an operational role here,’” Esper writes.

The anecdote is one of many Esper recounts that illustrate Trump’s limited knowledge of the guiding principles of the military.

“The president didn’t understand Milley’s role as a statutory adviser to the president and secretary of defense, nor did he understand the different roles and authorities of active duty and Guard forces,” he writes.

In one White House meeting, Esper and Milley have to talk Trump out of recalling Gen. Stanley McChrystal and Adm. William McRaven to active duty so they could be court-martialed for criticizing Trump after they retired.

In another chapter, Trump doesn’t understand why his over-the-top plans for a 2020 Fourth of July celebration, including a massive flyover of the White House by 107 military aircraft for his supporters and donors during an election year, might come off as politicization of the military.

Esper spends a weekend coming up with an alternative flyover plan that would start in Boston and make its way down to Washington, billed as “A Salute to the Great Cities of the American Revolution.”

And without telling the White House, he trims the planes to about two dozen. “If someone from the president’s team wanted to sit on the South Lawn and count the aircraft flying overhead that afternoon, then so be it.”

On his book tour, Esper gets little pushback from a mostly friendly press, one exception being Bret Baier of Fox News.

“There are other people in the administration besides the president making these suggestions, making these pitches,” Baier pressed Esper on his nightly show. “You portray it like President Trump was off his rocker and you were the sole person pushing back.”

“It wasn’t just me,” Esper replied. “At times, it might have been Secretary of State Mike Pompeo. There were different players at different times in different situations pushing back on what we thought were bad ideas.”

Esper is well aware that his making-lemonade-out-of-lemons narrative may sound to many like the “deep state” narrative, in which the entrenched Washington “swamp” was working overtime to subvert the policies of a president they just didn’t like. “It was true that, at times, we slowed the process down — so that we could analyze the problem, capture the latest intelligence, staff the matter broadly, and develop options for the president,” Esper writes. “But that was our job, our duty, and our responsibility.”

“To suggest, however, as [White House chief of staff Mark] Meadows sometimes did, that these were constant, intentional tactics by the DOD to undermine an elected president was wrong and unfair.”

Trump has responded to the book, as he has with all the critical books written by former insiders, by dismissing it as total fiction.

Ahead of Esper’s appearance on 60 Minutes, Trump provided CBS with a written response in which he called Esper “weak and totally ineffective,” adding, “Because of it, I had to run the military.”

“Esper was a stiff who was desperate not to lose his job,” Trump wrote. “He would do anything I wanted, that’s why I called him ‘Yesper.’ He was a lightweight and figurehead.”

“I would quickly learn that ‘weak’ was the president’s favorite word when describing adversaries or opponents, whether in the United States or abroad. It contrasted sharply with ‘strong,’ which was how he regarded himself, and how he wanted others to see him,” Esper writes near the end of his book.

“Trudeau, Merkel, and former U.K. prime minister Theresa May were in the ‘weak’ category. Russian President Vladimir Putin, Chinese President Xi Jinping, and Turkish President Recep Tayyip Erdogan were all in the other column.”

Esper is often asked why he didn’t just quit if he disagreed so violently with Trump.

It’s something he says he asked himself in extended periods of soul-searching, but it always came down to one question.

“If I resigned my position, who would the president install behind me, and then what would they do? Would they act on these crazy ideas?”

Jamie McIntyre is the Washington Examiner’s senior writer on defense and national security. His morning newsletter, “Jamie McIntyre’s Daily on Defense,” is free and available by email subscription at dailyondefense.com.