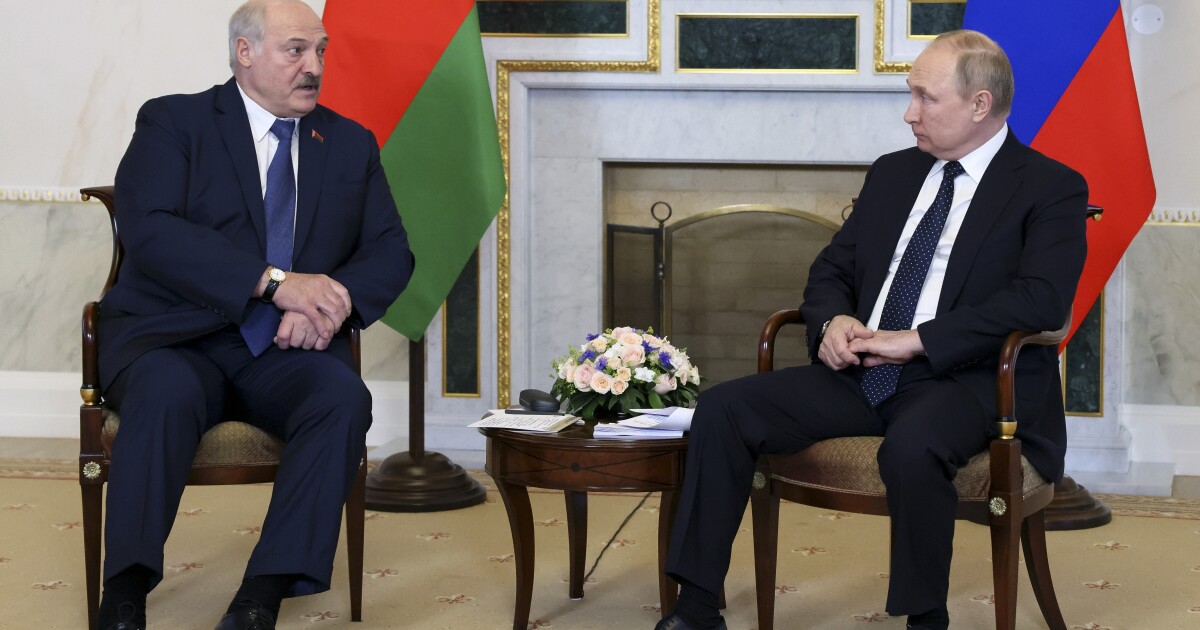 Russia plans to place nuclear-capable ballistic missiles in Belarus, a NATO-neighboring Russian ally that housed the forces that invaded Ukraine and attacked Kyiv.

Russia plans to place nuclear-capable ballistic missiles in Belarus, a NATO-neighboring Russian ally that housed the forces that invaded Ukraine and attacked Kyiv.

That missile placement would continue a trend of Russian President Vladimir Putin subordinating Belarus to his vision of a “union-state” led by the Kremlin while sending an ominous signal to NATO — perhaps especially Poland and Lithuania, whose borders separate Belarus from Kaliningrad, the Russian exclave near the Baltic Sea.

“Our decision has been made: We will hand over a number of tactical missile systems Iskander-M to Belarus within the next few months,” Putin said during a meeting with Belarusian dictator Alexander Lukashenko. “They can fire ballistic and cruise missiles with conventional and nuclear warheads.”

Putin’s statement comes on the heels of Vilnius’s announcement that Russia will not be permitted to transport certain commodities to Kaliningrad on Lithuanian railways, a move underscored by Lukashenko’s warnings to Putin not to trust Lithuania.

“The flow of information regarding their intention to stop transit from Russia to Kaliningrad via Belarus, to isolate Kaliningrad is increasing,” Lukashenko told Putin during the Saturday meeting, according to a translation from Belarusian state media. “Listen, it is tantamount to the declaration of some war. Such actions are intolerable in modern conditions.”

Western officials characterize Russia’s outraged statements about the Kaliningrad restrictions as propaganda, given that Russia can continue to send some goods by train across Lithuania and has unfettered access to Kaliningrad by sea and air.

“It is not the blockade that Russians are trying to portray that it is,” a European official said. “It will still be inconvenient for them — they [have] to ship these goods through other channels, but in a sense, we think that [inconvenience] is one of the reasons why the sanctions are adopted, because of what they are doing in Ukraine.”

“They could be upgraded, but, truth be told, the modernization has to happen at Russian aircraft factories (you and I will agree how it will be done), and the pilots have to undergo the relevant training,” the Kremlin chief said.

Putin backed Lukashenko’s calls for a response to U.S. acts against Russia, though he did not elaborate on how he would retaliate.

“I fully agree with you that we simply have to take care of our security, the defense of the Union State of Belarus and Russia, and probably defense of other Collective Security Treaty Organization states,” Putin said.

Russian state media have reported that Moscow will impose economic restrictions to mirror Lithuania’s policies crimping its access by rail to Kaliningrad, with “symmetrical restrictions … likely to be the key,” according to TASS.

Lukashenko tried for years to avoid coming too much under Putin’s control, relying upon assistance from the United States and other European allies who hoped to minimize Russia’s advantages in Belarus. Lukashenko’s independence from Putin took a severe blow in 2020, however, when he had to turn to the Kremlin for aid in suppressing mass protests erupting in response to his claim to have won a presidential election widely perceived as rigged in his favor.